Our road to independence was not an overnight coup or even an ever changing revolution, it was a journey with ups and downs that spanned nearly 20 years. Sandwiched between two Treaty of Paris' the American colonist were a new people, not exclusively English, German, or Dutch but American. As this new world expanded and grew it became more and more evident that being only a colony of a greater empire would not sustain itself. This very long series titled "Journey to Liberty" starts today and will take us through the next 20 years of how resentment grew, anger boiled over, and eventually revolution was declared. Our journey as an American people is important and must never be overshadowed by modern events or overlooked by any social or philosophical ideal. Our Journey to Liberty is one that speaks to us all, defines us all, and helps us understand what our present and future will hold. It reminds us of our destiny, it reminds us of our purpose, and it tells the rest of the world that we are different and proud of it.  Our path to freedom was paved not by ungrateful colonists upset over taxes, not by simple farmers wanting to be left alone, and not by founding fathers who were seeking selfish ambition. Our freedom, our independence was gained by a people who believed that "Governments are instituted among Men, deriving their just powers from the consent of the governed," and England was instead placing the heavy hand of monarchy and parliament upon them. Our nation is founded upon the great principle that "all men are created equal" and the history behind how we came to be a nation like that is crucial to understand. So we start, 250 years ago, and begin to see the wheels of discontent turn toward separation from Great Britain.

The year 1763 was a pivotal year in the formation of our American Republic. It was 250 years ago today that the peace treaty was signed between Great Britain, France, and Spain which ended the Seven-Years War or better known in North America as the French and Indian War. This treaty not only changed the landscape of North America but set in motion the events that would lead to American Independence. 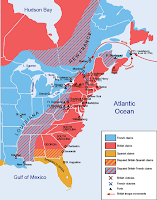 European countries over the previous century had been scrambling for control of lands in North and South America as the need for natural resources grew. While Spain and Portugal mainly fought for land in the South it was Great Britain and France that were fighting for land in the North and by the mid-eighteenth century some of the richest of all the land that both countries were fighting over was the Ohio Valley. Wealthier American colonists, especially those in Virginia such as the family of George Washington, had been speculating along the Ohio Valley region and had money heavily invested in expanding and growing it. At the same time France started building forts in the area to secure what they believed was their right to do because it was their land. A stalemate had begun and someone was going to have to break it. After various attacks took place in 1754 and 1755 led by non-other than George Washington, General Braddock and others, action was necessary by the British army. In lite of the defeats that occurred there was little interest in England to fight the French for territories in North America. However in 1756 England finally declared war on France which began the Seven Years War. France saw success at first with the help of Indian allies in the region yet by 1757 England, led my William Pitt, and borrowing heavily to finance the war effort, saw success because Pitt viewed the situation as an opportunity to vastly expand the British Empire. Pitt even paid American colonies for raising troops to fight against the French. Eventually Spain joined on the side of the French but it was little help. With the help of Prussia as an ally in Europe, England continued to see victories and so they trained their eye on French and Spanish territories all over the world. After the fall of Montreal in 1760, fighting all but stopped in North America but continued in Europe. The war officially ended with the Treaty of Paris which was signed on February 10, 1763. 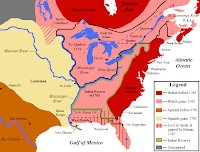 Why is this war and the ending of this war so important in the history of our American Revolution? How is it that we can look back to the events of the French and Indian War and its aftermath and see the wheels of revolution start to turn? It has a lot to do with what had been happening in the colonies over the last century and what changed with how England dealt with the colonies afterward. "It would be a mistake to overstate the independence of families from the social milieu, both local and regional." (Lemon, Colonial American in the Eighteenth Century, "Colonization: 1490s-1770s", p.131) Since the first settlers landed in the New World there was no assistance from the mother country, they were left to fend for themselves, they had to work together with the people around them, and rely on each other physically, socially, and politically. Even the Mayflower Compact, our peoples' first governing document speaks to their independent nature, and although they give recognition to the King of England their laws and governance were to be left to their own accord.


"In the Presence of God and one another, covenant and combine ourselves together into a civil Body Politick, for our better Ordering and Preservation, and Furtherance of the Ends aforesaid: And by Virtue hereof do enact, constitute, and frame, such just and equal Laws, Ordinances, Acts, Constitutions, and Officers, from time to time, as shall be thought most meet and convenient for the general Good of the Colony; unto which we promise all due Submission and Obedience."

The basic colonial government started at the top with a Governor appointed by the British Crown, from there you had his council and then the elected Assembly. As the population grew and the economy expanded the power of the elected Assembly grew as well. The colonists would drink to the King of England but with him and his army far away to enforce their will there was a major disconnect in what it meant to be a British citizen and a colonist. With those sentiments the Governors had trouble administering their authority or implementing British laws without the cooperation of the colonists. "By the mid 1700s American political ideas became apart of a "great tradition of the eighteenth-century commonwealthmen, the radical Whig ideology that arose from a series of upheavals in seventeenth-century England - the Civil War, the exclusion crisis of 1679-81, and the Glorious Revolution of 1688." (Middlekauff, The Glorious Cause, p.51) All these factors led to a citizenry who were accustomed to self-government. Each colony elected officials who would levy taxes, create colonial budgets, and maintain order. To all of the sudden be forced to take orders from the British Parliament and Crown on matters that for over a century they had controlled for themselves was a difficult pill to swallow. It is true they always considered themselves loyal British subjects but this was not England and the rules were different, they had been since the Pilgrims first landed here to settle. However by the mid-1700s the British Government failed to see it the same way and wanted to implement their will upon the people.

As the French and Indian War commenced in the mid 1750s the separation between the colonies and the mother country was evident. Written sometime in the 1820s by William Wells, grandson to Samuel Adams, he spoke of the events before and during the French and Indian War stating, "The events of the war, and the government mismanagement (since the first colonists came here)... prepared the people for the struggle which was to rend the colonies from the mother country. The press commenced the discussion of popular rights, and no doubt many speculative minds calculated the probable fate of America at some future date as a separate sovereignty." (Carr, Seeds of Discontent, p.315) Clearly the path to creating a new nation was being paved since the first settlers landed here in the late sixteenth century however it took something major to push them over the edge. As the British started to maintain a standing army in the colonies for the first time ever, limit the expansion west (which was one of the key purposes in fighting in the French and Indian War as far as nearly all the colonists were concerned), and begin direct taxes that the colonists had never seen before or approved it becomes quite evident that the colonists were getting pushed closer to that edge. As we will examine in the coming years one decision after another by the British, forced the American colonists to rise up and stand against injustice, eventually getting to the realization that their destiny would be to create a new "Nation, under God, Indivisible, with Liberty and Justice for All."