In 1956, thanks largely to the efforts of Martin Luther King Jr, segrated bus laws in Alabama were ruled unconstitutional. This letter was produced by the "Montgomery Improvement Association" headed by Martin Luther King Jr. The letter highlights caution for all those who were about to have the opportunity to sit anywhere they want on the bus. I find this to be a great read on how King wanted to maintain integrity and peace even after this victory. Take the time to read and share it with others. I'd love to know what other people's take on this is. 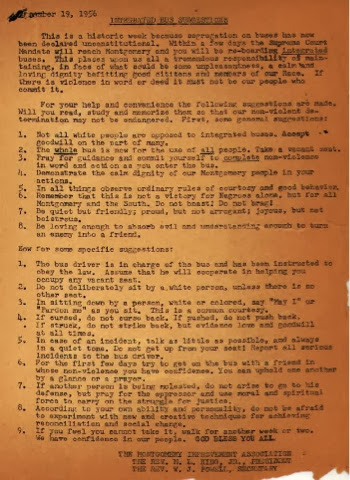 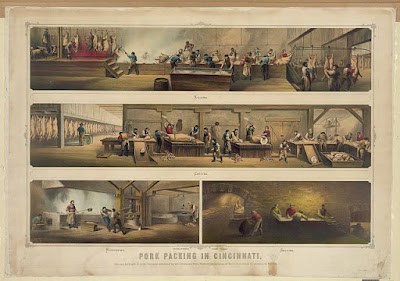 "It was Cincinnati that originated and perfected the system which packs fifteen bushels of corn into a pig, and packs that pig into a barrel, and sends him over the mountains and over the ocean to feed mankind." - favorite sentiment of Cincinnatians in the late 19th century. (referenced)

Cincinnati, Ohio in the early 19th century was the center of the pork industry. So much pork ran through that city it became known around the world as "Porkopolis." Various research has been done on this time period & industry, however I wanted to focus on a project developed by Dr. Robert Gioiello from the University of Cincinnati, Blue Ash Campus called "Rethinking Porkopolis." I would encourage you to look at the link below which shows you all the panels from the exhibit. I had the pleasure of sitting down and listening to Dr Gioiello speak about the Ecology of Race and its connection to the Cincinnati Pork Industry. I encourage you to spend a few minutes and learn about a subject you did not think was as important as it actually was.

While moving a "Johnny Reb" Statue in the city of Orlando a time capsule from 1911 was discovered. The time capsule was laid by the United Daughters of the Confederacy. If you haven't had a chance to see this news conference it is totally worth your time to see. Despite being against the wishes of the United Daughters of the Confederacy (who are actually fighting the city in court over opening it), the city held a news conference while they opened it for the first time. Various items such as money, a flag, and a newspaper were found. Although nothing earth shattering it was fun to watch this box opened and explored for the first time.
Orlando Sentinel Article

So many people celebrated the World Series Champion Chicago Cubs and their amazing victory over the Cleveland Indians. Not only was the series and Game 7 unbelievably entertaining but the Cubs broke a 108 year drought, it’s no surprise people are ready to party. Like all Pro-Sport Champions a parade was scheduled for November 4, 2016 throughout the streets of Chicago. This gathering turned out to be the 7th largest gathering of people in human history. That had me wondering, what are the other six?

1)      Kumbh Mela Pilgrimage, Allahabad, India on February 10, 2013 (30 Million) – Considered to be the greatest spiritual festival ever held in which Hindus come to bathe in a holy river. They believe that once one takes a bath in the holy river during Kumbh Mela their purification of sins or karma is increased. They are traditionally held in four major location every 12 years, one of them being Allahabad. In 2013 the festival in Allahabad was believed to have brought in nearly 120 million people over a month with February 10th to have had an estimated 30 million people. The following is a 60 minute video on this very event. (WARNING: male nudity).

2)      Arbaeen Pilgrimage, Karbala, Iraq on December 13, 2014 (17 Million) – A Shia Muslim event which commemorates the martyrdom of Husayn idn Ali, grandson of Muhammad. It is a pilgrimage on foot with some travelling as much as 300 miles. For years Saddam Hussain, dictator of Iraq, forbid the event to be celebrated so when his regime fell the Arbaeen Pilgrimage was started again in 2003, even being televised worldwide as a celebration of their new found freedom. Although every year the event is one of the largest gatherings it was especially so in 2014 because of eased visa movement in Iran. Article on the Pilgrimage 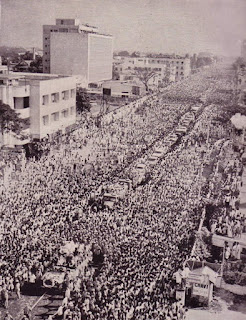 3)      C.N. Annadurai Funeral, Chennai, India on February 3, 1969 (15 Million) – Also known as Anna, which means elder brother in Tamil, was a leader and champion of the people of Tamil Nadu a very populist and southern state of India. We gained attention in the political arena due to his excellent writing, speaking and debating skills in both Tamil Language as well as English. Annadurai worked his way up the political ladder in Tamil Nadu and in 1967 we became Chief Minister of the state. Sadly within 2 years he developed cancer, even coming to the United States for treatment. In February 1969 he died, caused by his use of tobacco. The streets of Chennai were packed with people paying their respects to the one of their most revered politicians.  His funeral still holds the Guinness Book of World Records for the largest attended funeral in history. 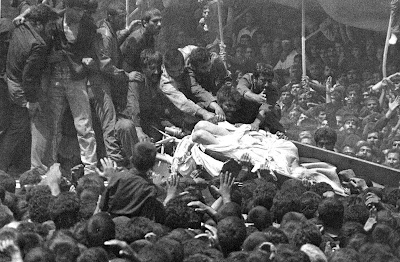 4)      Funeral of Ayatollah Khomeini, Tehran, Iran on June 11, 1989 (10 Milllion) – Ayatollah Khomeini led the Iranian Revolution in 1979, founded the Islamic Republic of Iran and became Supreme Leader until his death in 1989. Khomeini was very outspoken about democracy and the United States, saying democracy was a kin to prostitution and the United States was the “Great Satan.” Within Iran he was treated with god-like status where even to this day one can be punished for speaking against him. Khomeini died as a result of five heart attacks over a ten day period. Nearly one-sixth of the population poured into the streets of Tehran to see the 20 mile procession. The heat was so unbearable for the people that fire trucks were seen spraying water on the crowds. This along with the extreme pain of losing their leader led to chaos in the crowds. When his body was flown in by helicopter to the gravesite the people’s grief seemed to overwhelm them, grabbing for his body and attempting to tear his shrouds off. After all was said and done, 10 people were trampled to death, 400 with serious injuries, and thousands more were treated as a result.

6)      World Youth Day, Manila, Philippines on January 15, 1995 (5 Million) – We are back in Manila for number six. Exactly 20 years early Pope John Paul II visited Manila for World Youth Day. Celebrating a mass on the last day the crowds started to grow around Luneta Park. Some people even admitted that there was no chance they would be able to physically see the pope but being this close was important because they could feel his presence. 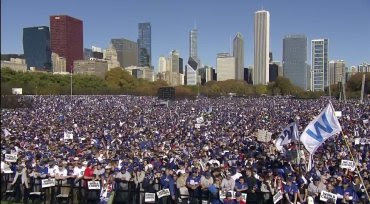 7)      Chicago Cubs World Series Parade, Chicago, Illinois on November 4, 2016 – Typically you would think an outdoor event in Chicago in November wouldn’t get a lot of people out. However the weather was nice and this is the Cubs winning the World Series for the first time in 108 years. It was something special to celebrate. People lined the streets for the parade route as well as in Grant Park where the rally took place. As early as 4 am people were piling into the city. No crowds like this have ever been seen in the Western Hemisphere.

I would like to welcome everyone to the Carnivalseque! If you are unfamiliar Carnivalseque is an interdiscipinary blog carnival dedicated to pre-modern history. Every six weeks or so a new blogger hosts the carnival from nominations that are received. I've been fairly dormant on my blog over the last 6-8 months due to a career change which, as excited as I am, has taken a considerable amount of my free time. Hosting has forced me to get back to reading and writing about history, which I so dearly love. So let's get started.


Title: Archaeology and History: A Fruitful Dialogue?
& The Great Divide? Historians, Archeologists and the Interpretation of the Past
Blog: History Matters @unishefhistory
Author: Charles West & Hugh Willmott
What an appropriate way to start our Carnivalesque with the discussion of archaeologists versus historians. Sometimes there can be a revival or even animosity between the two disciplines. A series here by the Department of History highlights why early medieval history is "blessed, not cursed, to have two vibrant intellectual traditions working on the same period of time."

Title: How to Make a Cooked Bird Sing, c. 1450
Blog: Ask the Past advice from old books @askthepast
Author: Elizabeth Archibald
Posted for Thanksgiving Day this is hilarious and I promise you won't be disappointed when you read it. Anything I write here will not do it justice.


Title: F - Facial Reconstruction
Blog: Hx: Leppers, Lancets, Lobotomies
Author: Paul Middleton
There are some pictures in this that are pretty graphic however if you are interested in a brief history of facial reconstruction which dates back to 1597 then this is for you.


Title: When and How Geology Became a Science
Blog: The Renaissance Mathematicus @rmathematicus
Author: Thony Cristie
The history of geology as a science has in important role in the disciplines that we study. Tied nicely with the History Matter posts on archeology and history this posts focuses on how geology became a science. It even provides some great links a fuller look into this subject.


We did not get as many nominations as I had hoped but still we have some great blogs here on various disciplines that are worth reading. Please feel free to comment on additionally great blogs you have read over the last few months that would fit great into the world of Carnivalseque.